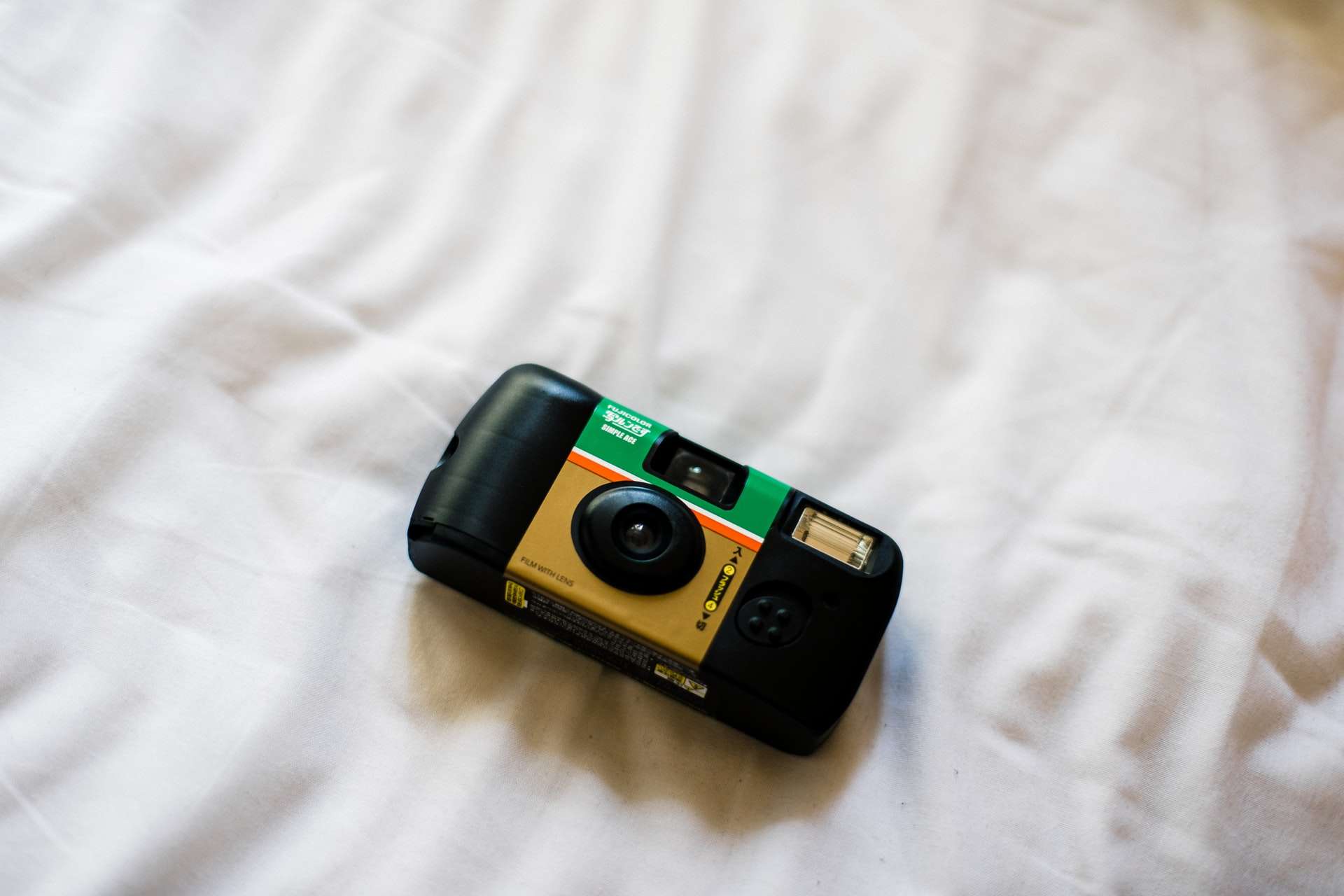 Disposable cameras, AKA single use cameras are fun and easy to use. This quick read will make you an expert! If you don’t want to “dispose” of the camera after using it, I will also tell you how to reload it.

Even today there are uses for the good-old disposable. Leave one on each table at a party or take pictures underwater are two examples of when they are handy. Many of us use a disposable camera the same way as digital cameras, which is not the right way to use it.

The right and easiest way to use a disposable camera is to wind the gear to the right side until it stops and turns on/off flash using a flash button.

What is a disposable camera?

Disposable cameras are used for capturing photos until the film runs out and then throwing them away. However,  you can use them again by reloading which I will explain later.

These cameras are lightweight, cheap, made of plastic, and super handy in case you forget your digital camera, and you can’t afford an expensive camera, etc. Also, some disposable cameras are used to take pictures under the water, which is quite fun. It was first manufactured in 1986 by Fujifilms, and after two years in 1988, Kodak released the first 35mm disposable camera.

These are widely popular with tourists and travelers.

A bonus tip for you is to while taking a picture keep 3 to 5 feet distance, because the range of the disposable camera is no fart, and they don’t have a focus feature, so make sure you’re in the range where you can take a clear and crystal photo.

How does a disposable camera work?

There is nothing too complicated about these little guys, which is the beauty of it. It is easy to use, and the process behind its working is simple. The camera contains a plastic body, shutter, lens, film, and flash circuit, and its parts arranged in the following list.

It worked something like that when you wide the gear at the right side, film rolled, and on the pressing shutter button, the button triggers the working gears, and it captures the photo.

How many pictures does a disposable camera take?

There is no specific number. Every disposable camera takes a different number of pictures, which are mentioned on the camera. A very popular Fujifilm Disposable 35mm Camera allows you to take up to 27 pictures.

What is the best disposable camera in 2021?

These are the 5 best disposable cameras in 2021 that you can get and take outstanding pictures. All have excellent ratings, which is above 4.5 out of 5.0 on Amazon, and also you can get discounts as well.

Where can I develop old disposable cameras?

You can try local stores, but your best bet to develop your pictures are the following:

How do you get the film out of a disposable camera?

First you need to completely wind the film to the end. You will feel when it’s done, it should wind freely.

You can simply take the whole camera to be developed or remove it yourself.

To accomplish this you’ll need a sharp-pointed object like a knife to open the film door on the bottom of the camera body. Here are the steps you need to follow to get your film from the camera and save money:

You can watch a step-by-step in this video:

1. How much does a disposable camera cost?

The price of disposable cameras varies, all models have different prices, but the average price of a good camera is between $10 to $30. You can buy from Amazon at a much lower price compared to a local store or Walmart. Also, for you, I find 5 best disposable cameras that you can get under $30 from Amazon. All cameras are worth buying, and before going to buy, I recommend you to read Amazon customer reviews as well. Because people from all around the world already buy and use it and they better tell you the pros and cons.

Yes, they take pretty awesome pictures. They take much better and exciting images in good light. They came with a flash, but in good light, you will get better photos compared to low light. Also, sometimes they take good quality pictures compared to digital cameras, and even they can’t beat the saturation of disposable cameras. All you need to do is know how to use disposable cameras in the right way.

4. How to use Kodak disposable camera flash?

The process of using a Kodak camera is straightforward and similar to a regular disposable camera. You’ve to wind gear at the right side until it stops, points to the object you want to capture, turn on flash if it has, press the capture button that’s it.

5. How many photos does a Kodak disposable camera take?

Kodak disposable camera takes 27 exposures/photos. The camera has a 35mm film, which is loaded with 24 exposures, and you’ll get three 3 extra exposures for not exposing to light, so a total of 27 photos you can take.

Yes, Walmart develops films, but it is costly. An average price that you have to pay to Walmart or other stores for 35mm and 24 exposures roll is between $10 to $15. Also, price varies; for example, if you develop a roll of 12 exposures, its price will be different.

7. What disposable camera does David Dobrik?

David Dobrik, a famous Slovak YouTuber, used Fujifilm quick snap flash 400 single-use camera with flash. It is very good you can use it like other disposable cameras. Its price is around $25, but the price varies according to the pack you get. You can take 27 exposures. Also, Fujifilm quick snap flash 400 has a pretty impressive user rating on Amazon, which is 4.5 out 5.0. You can check the latest price and more details from here.

8. How long will undeveloped film last?

Usually, how long will it stay written in the film, and the longer you’ll keep the film in a cold place, the longer it will stay compared to a hot temperature place. Also, the longer you will stay, it will affect the quality, so it’s your decision, but in cold temperature, these can stay longer.

No one tells the exact days or years how long it will last, but a good camera can survive 3 to 5 years, but in these years, there are chances that you’ll not get the same quality photos because due to temperature film can damage. So, it would be best if you didn’t take risks.

10.  Can disposable cameras be reused?

Yes, some cameras could be reused. You can enter a new film and reuse it.

Now, grab your underwater disposable camera and head to the beach — or the bathtub?!